Just as mid-November 2015, there was speculation of a convenient marriage between National Resistance Movement and the Uganda People’s Congress, during the Campaign before the General Election of 2016 and as a preparation before the 10th Parliament. The Parties have stalled before as the founder and first Prime Minister Milton Obote, didn’t have many kind words for now President Museveni, as his son James Akena, the now President of UPC have traded for brown envelopes of shillings and longevity. He was tired of running in the wilderness, while the NRM continue to have the finger in every pocket and he wanted to be able to get something extra. So as Mid-June 2016 and the new Cabinet, even UPC MPs was elected into the 81 large Cabinet as a token of the Memorandum of Understanding between Akena and Museveni. Something Obote back in the day would have slapped.

This is what Dr. Olara Otunnu has said about the marriage recently:

Planned cooperation since 2011, apparently:
“President Yoweri Museveni on Wednesday this week held a meeting with NRM leaders from Lango sub region who were aggrieved with the appointment of 2 UPC members in the new cabinet, leaving out party members who sacrifice a lot for the ruling party. The President told the group: “I know you honourable are wondering why I picked some people out of the family (NRM) to the cabinet. I am only sorry that I did not tell you people earlier, but I have been in clandestine relationship with them (UPC) since 2011,” Museveni told the NRM members according to sources who attended the meeting” (Sewakilyanga, 2016).

So with this in mind, that Dr. Olara Otunnu has talked long time about Museveni moles in the UPC Party and with the knowledge of the UPC-NRM alliance. There are certainly that the UPC are no on the short side of the stick, as they are not the ruling party as they once we’re when father of James Akena was running the country under the UPC-Banner after independence and traded for loyal support Baganda together with the UPC-KY marriage. This was in the 1960s, but the way the party folded and lost relevance, as the resurrected Conservative Party, have never been able to take the place in the political spectrum as the Kabaka Yekka once had, as Dr. Milton Obote abolished the kingdom and also lost his place Prime Minister, before the Coup d’état against him as well, that ushers in the Dictator Idi Amin. That also opens for the surge and military operations together with Tanzanian troops to invade and set in place for a second term for President Obote. That also gives now President Museveni, a place in his cabinet, before he goes to the bush to bring down Obote. So with all the blood and tears, it is weird that the man that had the ability to bring down the father. The man who got rid of the father and run the country, are now collaborating with peaceful with his son James “Jimmy” Akena who runs his father’s party and from his father’s foundation, Milton Obote Foundation and headquarter in Uganda House. 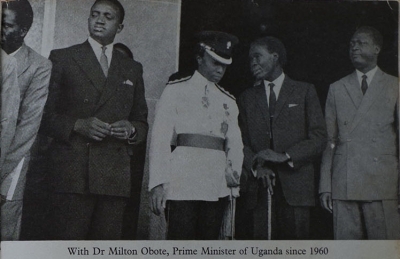 With this quick recap of history and neglect, it is just weird that UPC who swallowed KY with ease and tried to silence the Central Kingdom of Uganda, Baganda and Mengo circuit of Kampala, still they are now forging a similar trade, as a minor agreement with NRM for their own goodwill, to be a loyal partner with NRM instead of working on their own.

So with all of this in mind, let us take a look at the 1960s struggle between convenient marriage then between Kabaka Yekka and the Uganda People’s Congress, then between the King Mutesa II and Dr. Milton Obote as they we’re going together in the first election to gain traction in the newly made Parliament and also force way for the first PM Obote, whom later would force the Baganda and king in Exile, as he wanted to centralize all power in the Executive and not have to tangle with royals or kingdoms, as he abolished it. But before that and while in the beginning, he had a cordial agreement who both parties earned on and gain majority in Parliament, as they could get a grander place then the Democratic Party of the day. Take a look!

First Report on the KY-UPC Alliance:

“According to the terms of the KY-UPC alliance, UPC leader Milton Obote became Uganda’s first post-independence Prime Minister in a coalition government with KY, while the Kabaka of Buganda, Mutesa II, was named Uganda’s ceremonial president by constitutional amendment in 1963.25 From independence in October 1962 to June 1966, however, the UPC-KY alliance disintegrated as the UPC expanded and aggressively centralized the powers of the federal government, showing little sympathy for Baganda nationalism or the rights of Uganda’s kingdom governments. Indeed, the UPC repeatedly attacked KY as a “tribal” party that was unable to meet the nation-building challenges that Uganda faced after independence” (Scott, 2006).

“Buganda and its king, the Kabaka, have been especially reluctant to cooperate with the rest of the country in its evolution towards a more centralized form of government. On the last day of 1960 it went so far as to declare its independence from the rest of Uganda” (…)”The UPC on the other hand is determined  to get into power, and many of their political maneuvers have a reckless flavour to them. Obote is unkindly reported to be willing to sell his soul to become the first Prime Minister of Independent Uganda. Some observers feel that his compromise with the Kabaka was just that. Buganda has quite a history of broken agreements, and the big question today is how far they will honour their word to support the UPC. The Kabaka, affectionately known around here as King Freddie, is the dominant figure in Buganda. A shrewd politician, he has a remarkable ability, no doubt inherited from his illustrious forbears, of playing one side off against each other (and often winning)” (…)”The Buganda-UPC coalition had fielded a new but all but unbeatable party calling itself Kabaka Yekka (Kabaka Only). There were high spirits in the UPC Camp, while the DP was exhibiting a stiff upper lip. Both sides claimed to be able to form for a national government even if they got less than half of the seats in the Lukiko” (Wright, 1962)

“In forty-eight hours the outcome was clear. As one newspaper summarized it:

The Result as always in Buganda when the Kingdom’s status and identity seems to be threatened, was a solid closing of the ranks and yet another demonstration that, as far as the vast mass of Buganda are concerned, nationalism ends at the kingdom boundaries” (…) “soon after we talked to Basil Bataringaya, the DP’s able Secretary-General who was in charge of the campaign” (…) “He was by no means pessimistic, however, about the DP’s future. He felt it had picked up much ground outside of Buganda at the expense of the UPC since last election. He was also sure that UPC’s marriage of convenience with Kabaka Yekka would work to its disadvantage outside Buganda where most tribesmen are intensely suspicious of the Baganda” (Wright, 1962). 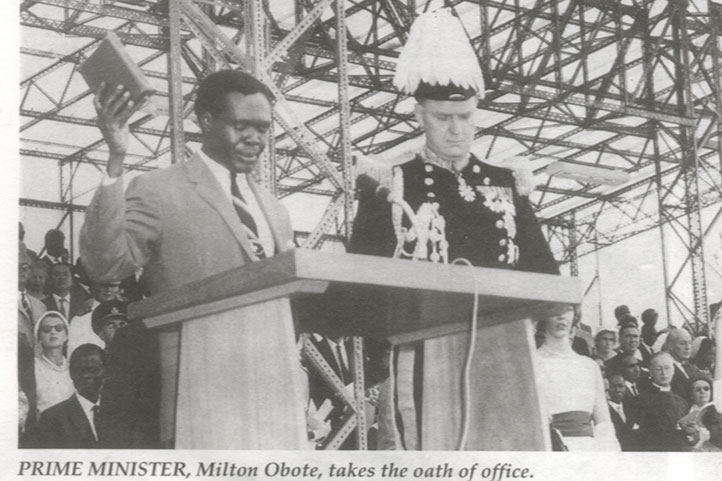 “The Election results turned out as we expected. 21 seats of the National Assembly go to Buganda. They are elected indirectly through the Lukiko (Buganda Government) That means “Kabaka Yekka” (Nur der Kabaka) The other 61 seats are elected through the people outside of Buganda in a secret election. 37 seats went to UPC (Uganda Peoples Congress) and 24 seats to DP (Democratic Party). The Democratic Party is made up of the last Government. Then there are still 9 more seats, which are elected by the new Government. UPC is more or less a communist party. I cannot understand that UPC and Kabaka Yekka went together in a coalition. I don’t think that the Bugandas are aware of the consequences yet. [ The names of these two parties alone made it clear to me, that they cannot work together.] We are acquainted with both, our new Prime Minister, Mr. Milton Obote, as well as the former DP Prime Minister, Mr. Benedicto Kiwanuka. We are also acquainted with other Ministers of the New Government. One certainly cannot say that these are incompetent people – quite to the contrary. Moskau has a very good hand and in fact understands to fish for the best” (Winklmaier, 2008).

I think that says enough and gives you’re ideas on my perspective on the matter and also see the similarties, between KY and UPC of back then and today, today it is UPC who is ones that is trading it all for the little coins in NRM cabinet, while KY traded their legitimacy together with the ambitious Obote to control the new Parliament and Cabinet, as the independent country and new government loomed the nation. Today the UPC is one of the old parties, still their weakness is so obvious as the internal conflict between Otunnu-UPC and Akena-UPC continues, while the UPC now is really embedded, as proven with the ministerial position to two party cadets, the wife of Akena and also another family member of the Obote clan in the Cabinet.

Just the proof the issues with the alliance, not only Otunnu who has issues with it, there are more men who disagree with Hon. Akena trade off. Peter Walubiri says this: “Museveni gave Akena money and soldiers and they hijacked the electoral process. He wants to take over our party but he will not succeed,” (…) “We [UPC] have not got any ministers, people can leave the party anytime they want and those too have left. We are going to expel them” (…) “Everyone supporting Akena is no longer UPC, but Movement. Those that want to eat are the ones going to Museveni” (…) “Justice Musota decided that Otunnu is still president until fresh elections are held, Akena has never been UPC president. They hijacked the electoral process” (Mayemba, 2016).

So the convenient marriage between the parties might end up with fractioned party, even more fractioned and create more fracas between Otunnu, Akena and the ones that despise the agreement made between NRM-UPC. As there was surely some who disagreed back in the day with UPC-KY agreement, though with the time, their voices have been silent or haven’t surfaced. the UPC are surely only helping Museveni and not their own cause, one can wonder how much the trade for the agreement and what cost it has for Museveni, as he get his former nemesis son James Akena on his side, with ding-ling little coins and a ministerial position, but not any real power. While the UPC continues to wrangle and in-fighting that even the agreement creates more fire, and the hut is on fire, and the whole village sees it. Akena can claim there are no fire in the hut, but the villagers see it and feels the smoke in their lungs. With this in mind, the Akena-UPC are no marginalize the UPC even more, even if he thinks he is getting a good deal, he is not. The only one earning on it is Museveni, as he get UPC embedded and under his control, while he gives away to measly cabinet position. That is for him, nothing and also scrap-metal as they are meagre seats and not pivotal in government as it is not Education, Defence or Foreign Affairs, but Fisheries and other smaller ministries that doesn’t have power or reach to create havoc. Peace.