Opinion: The only good news from Kololo, today; and also surprised that the Western diplomates didn’t know President Museveni sentiments on the ICC (or tried to forget) 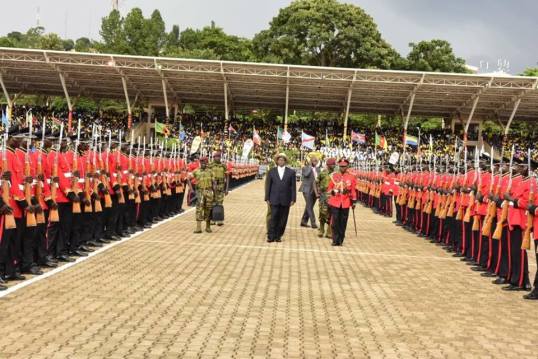 Well, the good news is not that there was a Swearing-In of President Museveni for his Seventh Term, bite me, it is not fifth, it’s Seventh! Got to teach the National Resistance Movement to count, after that the international media some recent history to not shave off the first decade in Power for Mr. Yoweri in Uganda.

The good news was:

“Department spokeswoman Elizabeth Trudeau said U.S. Ambassador to Uganda Deborah Malac and a visiting Washington-based official, along with several European and Canadian diplomats, abruptly left the inauguration after Museveni made negative remarks about the International Criminal Court in his inaugural address. She added that the U.S. also objected to Sudanese President Omar al-Bashir’s participation in the inauguration. Al-Bashir has been charged by the court for atrocities in Sudan’s western Darfur region” (Lee, 2016).

Because this set the perimeter of next inaugurations as Uganda is not the only country where the Opposition is under fire and where the human rights are squabbled for the Ruling Regime to control. But the reaction from the European Union representative and the United States is a bit late now. United States Government have supported them the Ugandan Government for three decades as the Ugandans have fought wars you wouldn’t touch with a your little finger. The European Union have done so in good faith and with the hopes that this will be one of their success stories as the beginning of Museveni terms he was actually sounding like a democratic ruler and had swagger like no-one else and even swallowed the Structural Adjustment Program; more than many other leaders did for long-term loans and direct-budget aid to the Ugandan government.

But that is not why the diplomates left the Inauguration of President Museveni at the Kololo Independence ground. They left the event in midst of the speech and everything because of mentioning of International Criminal Court, the discontent that exist in certain parts of Africa, as the ICC have target many African leaders and Warlords, while nearly none of the allies of European or American Government have been taken. Which make it seem like Post-Colonial tool and certain totalitarian, and Police State leaders feels that especially since they might be the next in line to be charged by the ICC. 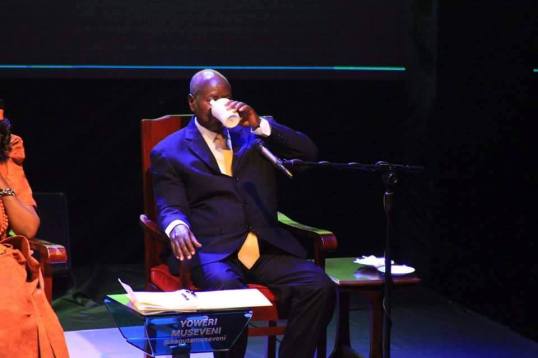 Even on the second Live Presidential Candidate or the second #UGDebate President: “A founding signatory of the Rome Statute, on ICC: Yes we should be out of the ICC. ICC is not serious. It is partisan. There are so many people who should have been tried if they were serious. The way to go is to have our own African Criminal Court. Trying to work with ICC was a mistake”.

So if the American or European diplomats were surprised by the words uttered by the President, they should check his track-record, and are you naïve? He is the same brother who toyed with the worlds in the Nairobi talks in 1980s, muffled the involvement in Rwandan Patriotic Front, the direct involvement in wars in Democratic Republic Congo that got rid of both President Mobutu Sese Seko and President Laurent Kabila. His involvement in South Sudan and also the claimed help of President Nkurunziza after the coup d’état in 2015; there are too many instances where he has went to the gun for himself and others. So that he dislikes the ICC should be seen as natural for his Western Allies, that have given military experts and equipment over decades.

He used ties to Libya to get arms to bring down Obote, Obote whom he had a agreement with to get rid of Idi Amin. This man has done whatever to get power and get powers other places. He is ruthless and does not care how far he has to go to have it. He builds people up and burry them if they get ambition. So many men have fallen and so many fallen without the reason or the authorities have cleared the cases of the killings. Many men who have had honorable positions and been high up in the military have been silenced by the NRA/NRM. And this isn’t just rumors, this is known, but not something that is talked about.

So European diplomates and American ones, you have to consider your obligation and role in Uganda, the walkout and the assessment of that, is only a small embarrassment, but to cut donor-aid and military equipment would mean something. To endorse directly Dr. Kizza Besigye would be another force of change. That would be like Alassane Ouattara won over Laurent Gbabgo in Cote d’Ivoire in 2010. Who made his own army and took over power when the International Community recognized Ouattara in 2011 and later detained Ggabo. So there are possible ways of creating the changes, but hopefully without guns though that is the only thing President Museveni believes in.

I know he told at one point he wanted to be a Pastor, but over the time he became a gun-loving, bush-war and embezzlement patriarch who oppose the idea of any other human being having a vision of leadership in the country he is running.

That isn’t a beautiful picture, but there certain questions remain why the American and European were mad about this:

“After introducing ICC indictee Bashir, Museveni said: “We lost interest in the ICC. We thought they were serious.” Museveni said he had supported ICC at the beginning but realised that “ICC is a bunch of useless people” (Trending.co.ug, 2016).

This words uttered from the mouth apparently was too much from the Western Diplomates today. Together with them we’re also the invited and warranted President Bashir; for me some strange reason no problem with the other hectic and problematic despots, dictators, lingering Presidents and so on; that also showed-up for the event. Why no problem with Cameroonian Biya? Why no problem with President Obiang? Why not mad about President Mugabe? And list goes on of people who disrespect democratic values and freedoms in their countries… though not sanctioned by the ICC.

For being diplomates, they should have known at least about the words said by the man on the Presidential Debate in February 2016. The ICC has already issues within the African Nations and the African Union have had talks on removing itself from the International Criminal Courts because of Post-Colonial affairs and targeting African leaders. So with that in mind, this doesn’t help the cause for the Europeans or Americans unless they do something serious, a ruthless man like President Museveni. Needs the guns and equipment, if not he trade with Russians and trains together with North Koreans, he has done it before and will do it again. Even order second level army equipment from China instead of getting training and army deals with Americans. The Western diplomats should not be surprised and should know his history and how reckless he can behave.

Why do you think Hon. Paolo Muwanga even feared and was disgusted with the man? He even understood to what extend the President would go when he got into power. Since he spoke beautiful words as it was needed in the Bush, the people and international community supported him.

Now there a long run since 1986, lots of European and United States Presidents have been in Power and changed leadership, while the Ugandan leader have lingered on and not caught flack before now, really? Late to the Party or is it the later redeemer now?

The issue is that they have known he has these sentiments, as the escalated violence, detaining and use of army against his own citizens. We can see it with the recent Post-Election killings in Kasese, the pro-longed Northern Uganda Conflict that lasted since 1980s into peace agreement in 2006; and the Ugandan-Fueled guerrillas in the DR Congo.

So that he is a little rash and rough with the introduction of President Bashir is the issue all of sudden, is sorry to say a little weak tea as you have given way for him to do all the other activities and not really condemn that. This because President Museveni have been a needed ally in the region after the fall of Mobutu, that American Government had for so long; that is why President Clinton even praised Museveni together with other leaders.

Today should not be surprising, the European and American Diplomates should have known his sentiments on the ICC, and he want to be a great leader, so he would invite anyone who wanted to show-up. This here is just the proof of it, nobody expected President Obama or Chancellor Merkel or even President Hollande to attend: They would rather have a cup of tea then showing-up. The strangest was that the former loyal ally President Kagame was in the wind… but that just so the strained relationship.

Well, this was my two cents. Not beautiful… just the way it is; when you have trusted a man to fight for you and expecting him to be peace loving democratic values full of integrity and standing by for liberty and justice in his Nation, while they have for decades let him get away with murders, destabilizing neighbor countries and done other adventures without giving him much of even a slap on his face. Then you expect him to be the grandest man… you have lost the plot fellow Western Diplomates. Peace.