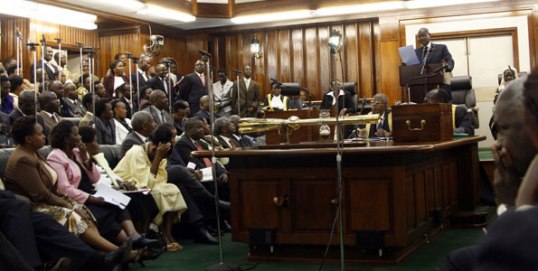 The level of arrogance that they have learned from the Executive, Chief Whip and Secretary General of the NRM comes to hunt the Parliament of Uganda. The Members of Parliament is set in their ways and used, sorry accustomed to monetary gains on the bills of the tax-payers already. The Income-Tax Amendment is just the new niche. They have already subsidized cars, housing, supported health-care and other add-ons that make their jobs easier and profitable.

As Reported in the Daily Monitor Today:

“Addressing a news conference in Parliament yesterday, Mr Peter Ogwang (Youth Eastern) and Mr Henry Musasizi (Rubanda East) warned civil servants like Mr Muhakanizi, who this week condemned their tax exemption deal, that they are also waiting for them in Parliament during the consideration of the Auditor General’s reports. “We cannot pass the budget until we are sure that our amendment to Income Tax Bill has been concluded,” Mr Musasizi said. “In case the President does not sign the Bill, it will still come back to the same people in Parliament. These are hard facts. We will still pass it without fear or favour.” The MPs also took shots at civil society groups which are raising public awareness over the controversy. “The public should be with us in the struggle to facilitate MPs. We need facilitation to go to our constituencies because a Member of Parliament without money cannot have confidence. But there is an option, if they want us to drop the amendment, the government should give us Shs30 billion in additional funding to cater for increased salaries and benefits for Members of Parliament,” Mr Musasizi said. Mr Musasizi, who moved the amendment to the Income Tax law, also revealed that what he did had the backing of the President.  “We agreed with the President in the [ruling party’s parliamentary retreat in] Kyankwanzi that we should not increase our salaries and benefits but tax on our allowances should be lifted to maintain the status-quo,” he said” (Mugerwa, 2016).

So certain ones are putting the budget on a stalemate in favour of getting more money and not paying tax as ordinary citizens as they are MPs and for some reason deserves more facilitation then the people of Kalerwe or Kaabong. The ignorance and arrogance is just learned by the Inner-Circle of the NRM. This is just the works of decades of decadence from the ruling elite and now the chicken comes to roost. The egg is ready to put in the basket and the MPs are ready to be paid their salaries without having income-tax.

The interesting is that the Kyankwanzi 2.0. that was recently and made implications to the doing of the Parliament, how it was practically empty as the NRM CEC and the Executive set the agenda for the next Parliament, the 10th One. The tone of now more benefits for the MPs in general, no salary increase for the MPs; the Income-Tax Amendment is an increase of salaries as they will get all the monetary gain and not pay for their facilitation for being an Member of Parliament instead of secretary at the district office in Mbarara.

That the MPs want to stifle the voting for the 2016/2017 budget for the steady “progress” of the country proves what values the representatives of population have. They are in parliament to eat, get fat and get bonuses that would be out of reach in other jobs. They want to make their life splendid on the tax-payers salaries and not become a “tax-payer” as long as they are representing the tax-payers. Which in turn is ironic; just recently they passed legislation that was made to fix the budget shortfalls of 2015/2016 as certain ministries was broke after the economic maladministration during the NRM campaign. That was done in hurry to secure salaries of the State House and other positions of the state. So they can offer something as long as the Executive also get his cut. But now they are forcing the Parliament and becoming hostile to create a functioning economic climate in the sense of their pockets. That is what they are initially saying. The proud men and woman who is supposed to be representing the tax-payers are saying that does not deserve to be taxed by the state. So who deserve it then?

The ones representing the tax-payer should pay tax. The ones that levy new taxes and regulations should themselves get taxed on what they earn. It is over the edge to see the moment of monetary greed from the Members of Parliament in Uganda. Their act of disgrace and attitude towards fellow citizens is overbearing. But they have just learned from their Executive who has teach them how he runs the Racket and racketeering, so that the NRM elite and the inner-circle also want their goods and glory as long as the cost is not theirs. The same way the Executive get funded for cars, jet-planes, housing and cattle-farms. Now the MPs want’s the same as their master. Peace.