Don Museveni says “I would never accept these foreigners to give me orders about Uganda”; Time to cut the direct donor assistance to the government budget of Uganda and after that let Don Museveni eat alone! 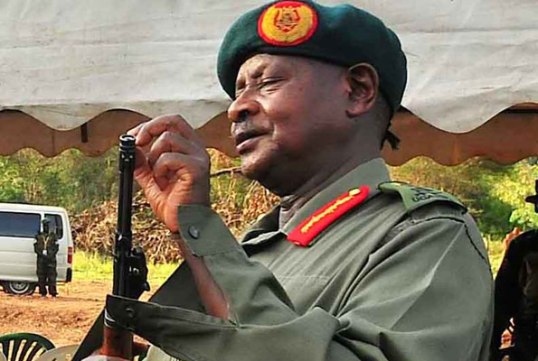 “I wouldn’t ask these foreigners, but I would never accept these foreigners to give me orders about Uganda. Or about anything in the world! They got their own countries to run. Let them go and run them. Uganda is ours. Nobody gives us orders here” – President Museveni at Kololo Independence Grounds Speech while celebrating the “Double Victory” on 9th April 2016.

Now that it is not long ago he told the world that Uganda was his playground and he could shot and kill opposition because they had no place in his country. From the same man and leader comes this. Let me ask the international community to react to violent behavior and the aggression this President shows his own county.

The racketeering of the NRM and their Executive has to stop at one point. That can happen when the funds dry up and the ammunition does come with the next boat. The American should stop with their alliance and their UPDF trainings. The Americans should do as they did with the MCC in Tanzania; suspend the projects and direct-donor aid to budget funding of the Ugandan Government. 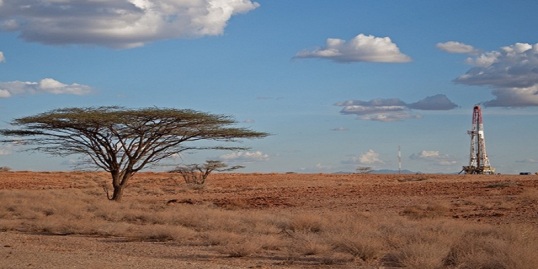 The French should stop supporting the Government projects in Northern Uganda and cut their loans as they have promised to effect directly the RDC and the other loyal cronies of Northern Uganda. This does so the Capos of the Don get their monies and keeps eating. While the Japanese should stop supporting infrastructure projects together with the Chinese Foreign Ministry, while the CNOOC should terminate their contract with the Uganda Government. Total Oil firm of the French should suspend their operation until the government accept their blood-money. The Same with Heritage Oil for Britain so the UK Gov. should disband their direct government support and take away the incentive from UK to Uganda. The Norwegian Government should suspend the Oil for Development Program that have been a steady program since 2006. Because if you hurt it where it could become most important, then the Don Museveni might listen.

The European Union should to hurt the Foreign Exchange rate suspend the import of Robusta Coffee beans from Uganda, as the export of this is a major factor in the economic trade in the land-lock country. “A total of 271,941 bags of coffee valued at US$ 25.12 million were exported in February 2016 -Source UCDA report”. If you want to hit where it hurts, then you take away the foreign exchange and the foreign exports. This here could really hurt the government that does not want to have any interference or questions about their rule.

If the Donors and giving aid, would suspend or cut the services for the Peacekeepers, the same reaction that the Dutch did with the Burundian Peacekeepers in the AMISOM in Somalia. The same could be done by the American Government and EU as they are the major benefactors for the economic spending ground and facilitators for it. 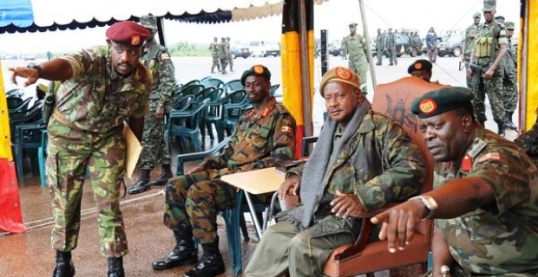 It is not like I am for neo-colonialism, but when a totalitarian and gangster like Don Museveni complains about the US Mission questioning his oppressive behavior and European Union saying their opinion on the display of character showed during the Election and announcement of the results. Then it seems like he does not need any-more international legitimacy for his rule. Only their money and aid when it comes in handy too fuel money to a private plane, refurnishing the State Houses, buying new cars and more estates. Especially considering in FY 2013/2014 the donor assistance of the total budget was 21 % of it. Therefore the USAID, World Bank, IMF, DFID, European Commission, Irish Aid, NORAD and the other contributors should suspend that for the coming financial year of FY 2016/2017. To not hurt the citizens do this instead!

They should support the IDP camps and refugee camps in the Ugandan country through United Nations programs and organizations, build stronger relationship with NGOs in Uganda and forge good governance programs instead of supporting a government who is carrying out rigged election and embezzlement of government funds and international aid. Therefore progressive use of the tax-payers money from the Western Hemisphere, and if that is not working then, use it instead on local infrastructure projects to their own tax-payers. 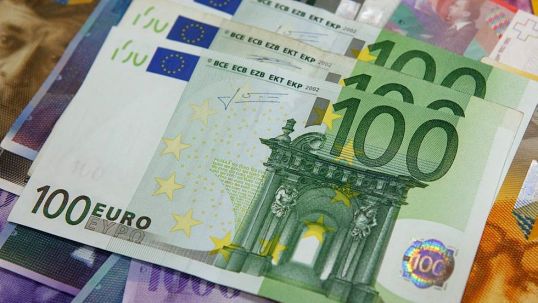 Especially when a specialized report on Donor Aid to Ugandan Government says this:

“Budget support has not helped much in relation to cross sectoral dialogue. Some improvement was realized in education sector as dialogue with Ministry of Local Government and Ministry of Public Service improved. But this has not happened for the health sector” (…)”The power relations between bilaterals and Global Health Initiatives including PEPFER, Global Fund, GAVI, Stop Malaria etc shifted in favour of the latter who had no experience in the development of the budget support process and completely ignored to an apparent ineffectiveness” (…)”Budget support resulted in a greater commitment and quality of dialogue on PFM issues, especially after 2007 with the launch of FINMAP and JBSF. The influence of performance measures on sector dialogue declined from 2011/12, as the link with releases became less clear” (Joint Evaluation of Budget Support to Uganda – Final Report – 2015, P: 132).

This here proves the values of the Donor-Funding and the Budget Support from the International community to the Ugandan Government and the NRM-Regime. The NRM mafia under Don Museveni who says that the Ugandan authority do not want to have internal interference and foreign people questioning his playground. Therefore the authority and the Don want to rest things into peace he lets the people end up resting in peace. As he takes the Army and Police to detain the ones it needs and use draconian laws to oppress his own people. 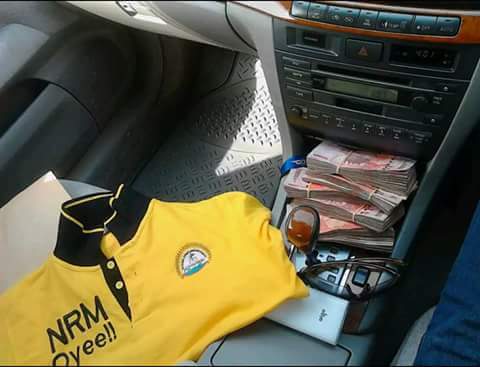 Therefore with also the fraudulent election to keep the NRM mafia in order and also silence the opposition; as it even did yesterday the 9th March 2016 with the Military Police taking over the Nakivubo Settlement Primary School so the “Victory Celebration” that was supposed to be held there with Lord Mayor Lukwago and FDC Leader Besigye. This happen while the Crime Preventers, NRM Diehards and the new MPs we’re celebrating at Kololo Independence Grounds while costing the 1, 5 billion shillings. The racket also carries to pay their own and let the kingpin eat the money alone. As he has done since 1986 and the donor have continued to fund the budget support and give Don Museveni money to do his bidding.

Therefore I ask the governments to question if they want to deliver more money the NRM Mafia who uses monies to the army and police, squander away State House money on funding his campaign and also rumors of AMISOM contingent. There are certain numbers on his spending on military is staggering over the years. In between 2011 and end of term 2016 the taxpayers and donor-funding the total Shs. 6.617 trillion to the Army, Police and Intelligence Agencies. Of this in MPS in February 2015 into the portfolio of sophisticated military equipment there was the extended use of Shs. 470 billion, alone that year. 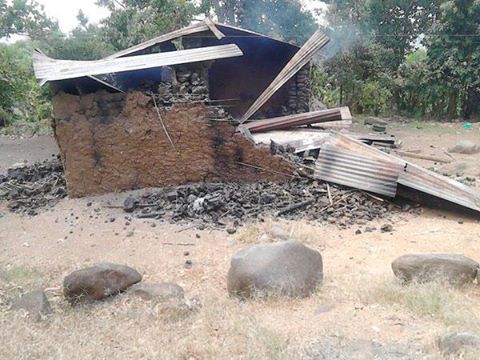 So with that knowledge and knowing the international donors should consider some reactions as he does not accept any interference not internal and not external. The Playground might be for the moment him, the Don Museveni has spoken of killing demonstrating citizens and opposition. The harassment of the ones that question the power of the kingpin!

That is when the international donors in the powers of US Mission in Kampala and their Amb. Malac recently; and also when the European Union does state the fact that the election was not free and fair. Therefore the Don Museveni feels betrayed as this has been loyal men who have given money to his government and not question his power or rule. Because they needed him to do their dirty-laundry and also have a steady ally in the East Africa; as the US have a relationship with Ethiopia and also Kenya, but have a longer engagement with the Ugandan Government, and now accepting the harassment of opposition as a price for some form of stability. 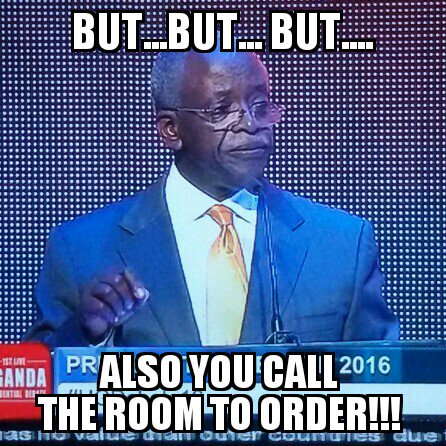 While the other donor-funding is not questioning other than expressing some have cut funding over the $12 Million that was going to Northern Uganda Development Fund (NUDF) in the 2012, that went lost to through the Prime Minister Amama Mbabazi. Also the Anti-Gay Bill had their reactions from UK, Norway and Dutch who cut parts of their aid. So now it is the time again, as the oppression, election fraud and the man who want to be the Don and acts like the Don of Uganda. The Godfather of Uganda has spoken. He does not want to be inference. So since he does not wish to have interference the international donors and bilateral organizations should offer him a hand with that.

The International donors and bilateral organizations should certainly suspend their direct budget support to the Ugandan Government. As they don’t wish to have any interference and can handle it all on their own. The money should instead spend on the Multi-National Organizations working in Uganda, as the OCHA, UNICEF and WFP as they will submit and carry out quick resolved matters in Internal Displaced Camps and around the borders through their projects. Since that will not have any other government questioning their actions, then the other governments should not help to fund their actions. Simple rhetorical assessment that banish the 20 % power of the funds that Don Museveni has at his disposal and use; when outsiders are such a pain, then the pain should leave Don Museveni alone and not support him. 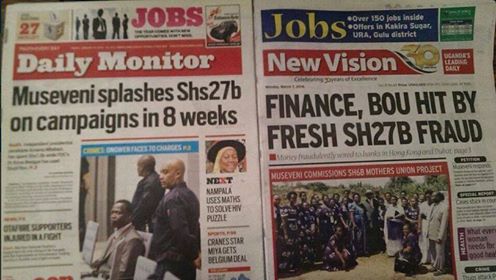 So the Donors and Bilateral organizations should cut their aid and give less power to Don Museveni and his NRM Mafia who spends and eats alone; while his government does not have money to build health care, roads, schools or the other necessities in the Ugandan Society. But not with Foreign tax-payers money, when they get used on the expensive cars, lavish lifestyle, foreign health care and private planes for the Godfather. There is time to take action as the gangster will act as Don and not as a Statesman. Henceforth, when a player does not want question, but accept your money and not accountable for them; and when the player squander the money and expect to get away with it. Then the Player should lose the ability to get the money from you. The Don Museveni have already had long enough time to deliver and used enough of donor-funds without showing progress. Time to cross out the donor-funding to direct budget support; then Don Museveni does not need to be questioned. As the international community will not have put a stake and being stakeholders for certain parts of the budget. But when they step away, then Don Museveni can be the kingpin and the gangster he want to be in military fatigue and do as he want in his playground, without opposition who should just stay home; and also without foreigners questioning him. Then he can rule alone with the capos, underbosses and then be grand Don Museveni. Peace.

One thought on “Don Museveni says “I would never accept these foreigners to give me orders about Uganda”; Time to cut the direct donor assistance to the government budget of Uganda and after that let Don Museveni eat alone!”