As I writes to you again and the only election petition to the Supreme Court have been dismissed as all of our pundits and most of the general population expected. We expect you grant budgets for lavishly ferry Crime Preventers and the few die-hard NRMs to Kololo for your coming Swearing-In ceremony where you will promise to withhold the constitution and laws of land.

There are issues and there are hesitant, the blatant disregard of the county you have been ruling for 30 years, the distance from you Mr. President towards your own citizens are growing more and more distant. The more you are with the Army and the Police then with your citizens.

The men and woman on your payroll and who are still obedient to your will say today was a gracious and monumental ruling as the dismissal of the petition while dropping most of the affidavits and evidence in the Supreme Court. While the general public and the reason why there are little share and joys in the cafes, restaurants and pubs where they have followed the live-coverage of the Supreme Court; if the people we’re agreeing they would be cheering in the streets, and you know that very well Mr. President. You know much your people like a celebration!

Mr. President today seemed like the Chief Justice Bart Katureebe and his fellow judges we’re hired men, just like Chairman Kiggundu of the Electoral Commission; that this was already your decisions and mind; let me speak your lingo Mr. President; they spoke and acted on your VISION.

Today was in your Vision Mr. President in total disregard for the public perception and the public assessment of the events that transpired during the recent year and through the Pre-Election Period, Election Day and Post-Election to the Announcement of the Presidential Election result. The Vision was yours and nobody else!

You can appoint every man to every position that exists in country as the Executive or even impeach the ones you dislike or get them fired. Detain and preventative arrest as orders from you. This is things you Mr. President have known for a long time; therefore you cling to power Mr. President. For these reasons alone you don’t want to give up that power and the Executive position.

The Supreme Court and the Chief Justice might read the verdict that gave you the power and validated the Election and the ballots that was announced. But the people and the pundits know the story and you can’t control it, even if you through every single opposition member and officials in jail without charges. Even if your going against every single media-house and censorship of the Social Media.

We know your military ways Mr. President as your been in the Western Uganda after the sparking violence that your Police set-off after Local Councilor III Elections went sour. That the government security forces went ballistic on the local population. We have seen your proud mind as your talks to locals and walk around in army fatigue and speak of going to punish the men and woman behind the violence. 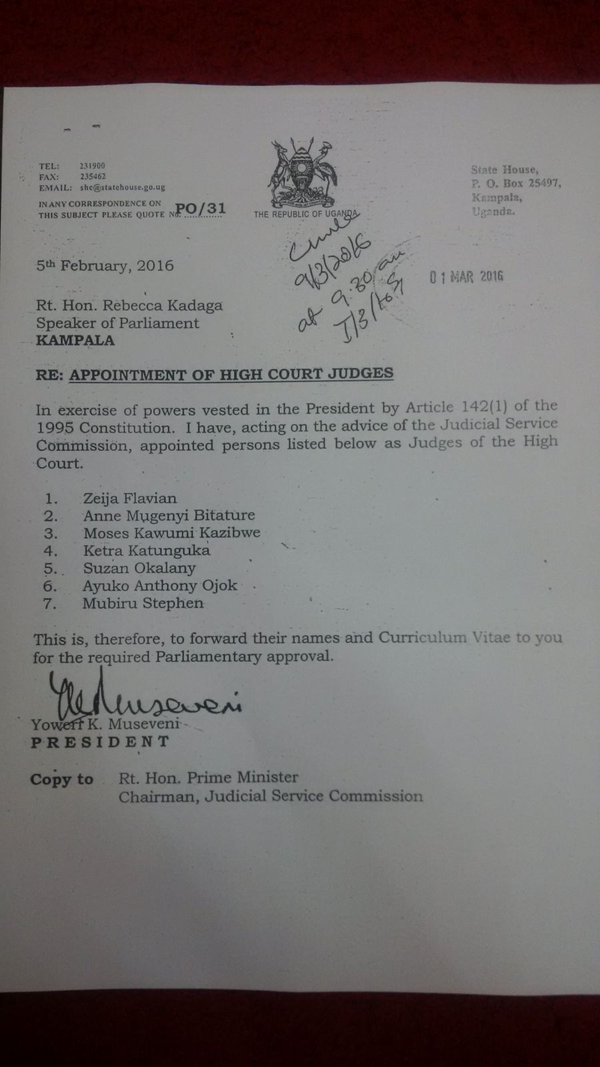 As you are in army fatigue and wearing the colors of the army, the Supreme Court validate your respondent to Amama Mbabazi petition. This is the result or you’re Vision and your ambition to continue to be the Executive of the country. The end-game is that distance between your power and structure, the vacuum of power between you the people is becoming at a distance. As the Opposition lingers in a limbo, a limbo created by your vision and the extensive use of Security Organization to distort them and detain them at will. Your Police Force and Army are creating criminals and making political activity illegal as long as it is not done in your blessing or your vision.

Your vision was behind this Supreme Court dismissal and the ways the General Elections of 2016 have gone. The Vision of your leadership the ways of your Power and the Structures you have created or rebuild over the 30 years in Power. The Power and the Executive should be stellar and perfect, the houses of Bundibugyo and Kasese should be golden and the industrial country you have promised since 1986 should have arrived already, but it hasn’t that is because we who see you; see that your vision is jaded and built around your persona and not the civic duty or the Executive to serve the public; it is the Public’s duty to service you; and nobody else then YOU, and that what you envisioned in the bush battles and the meteorically rise from days in the University in Dar-es-Salam in the 1970s.

Therefore your vision has come to full fruition today in the Court Ruling at the Supreme Court this day 31st March of 2016, as the guns, ammunition, detaining of fellow citizens and the grand control of every government institution of Uganda. That is what you know have, but the people’s consent, the people’s will or the people’s justified and legitimate rule is the one thing you don’t have.

Mr. President you might have hired the Supreme Court Judges, the Electoral Commission, but you do not hire the minds of the people who feels sorrow yet again and should mourn in the decision of dismissal of the 1st Election Petition of 2016 from Hon. Amama Mbabazi. That will always be another stain to your accord of grievances against the population and their will.

Your leadership is hired and taken for granted by yes-men and Nobel-Idiots who serve you blindly. Just as the hired armies of Roman Empire fall, one of the greatest nations and biggest nations fall when they didn’t pay enough to the barbaric princes and soldiers. Then their revolt burnt Rome. Your wisdom and your vision might serve you well as it has done, but just as the Roman Empire, your fall might come brutally and without excuse as your vision does not control the minds and hopes of all of your citizens. The Police State and Army aggression is not a sustainable governmental affair that you can suppress and execute without losing something dear. Something dear Mr. President that you lost long time ago, the legitimacy and the legacy of liberator, your now the main character of the oppression of the people and the citizens, through the Police Force and the Army.

Your vision is jaded and lost it. The Supreme Court and the validation of the election might occurred today; the reality is that the citizens and population is the ones validation you really need; the Supreme Court Justice might have given you a paper that validates your Executive Power, but it does not give you Carte Blanche to act as you please; or lets the people give your Modus Operandi of justice a free-for-all without questions the Authority you withhold without the clear consent of the publics will.

Mr. President is supposed to be with grace and honor, but the way you have handled it; it’s with disgrace. Not of me, but of your fellow citizens and their intelligence as your dishonestly takes their votes, their fate in the electoral process and their fate in the government as a representative authority and makes it your own personal playground. The Government is now in-graved in your name and your vision without any consideration of anybody else. The Statues and procedures and the coming Parliament is sham democratic place from a weaponized coup d’état where the opposition have been besieged and detained while the announcement was the final straw of pre-election period filled with malpractices of the whole process. Straight from the consultations meetings and state-lodge trips where you Mr. President gave ways to your coming next tenure and no disregard for your fellow citizens. This the legacy you leave behind, even the late Obote would be proud how you photo-copied and made it your own; in your VISON.

You’re said you are the only man in the country with a vision, and the vision is now that you are the one that decide everything. As you fixed and mended this Supreme Court ruling and dismissal of the petition. Hope you’re eating healthy and living well within your vision, but your blind by that vision, as that vision is not in everybody’s head. So please think about that Mr. President and is not what you have envisioned. Peace.

The Writer of the this Blog.