Dr. Kizza Besigye still under House-arrest at Kasangati; while Lukwago and EU EOM visits; the Calvary is kind and let a FDC supporter go in with some food to Besigye (26.02.2016)

Yet another day under house-arrest as the world follows the situation and the way the depressing; Uganda Police Force continues to hold Dr. Kizza Besigye house under siege and have no direct answer other than “preventive arrest”. They have not directly complied with it, while Kale Kayihura wrote in a statement on the 24th February:
“Rtd Col Kizza Besigye is not under house arrest. He is allowed unlimited access to his lawyers, family and party officials, among others, and is not in any way hindered from preparing to legally challenge the results of the Presidential Elections if he so chooses to do so”.

Well the DPC of Kasangati must be counting his boss or the direct orders of his master; if not it is a pure lie on the 24th February 2016 as the Uganda Police chief Inspector General of Police Kayihura. The DPC of Kasangati James Kawalya has the power to either let people in too Dr. Kizza Besigye or not. Therefore up to 15 people and supporters of Presidential Candidate has today been taken to custody by the police as not “everybody” can visit him; as they have to check if you fit the profile of the men that enter the home.

The ones that was allowed earlier in the morning today was one of his lawyers and also newly elected Lord Mayor Erias Lukwago was allowed into the premises with foodstuffs and having a chat with Besigye. 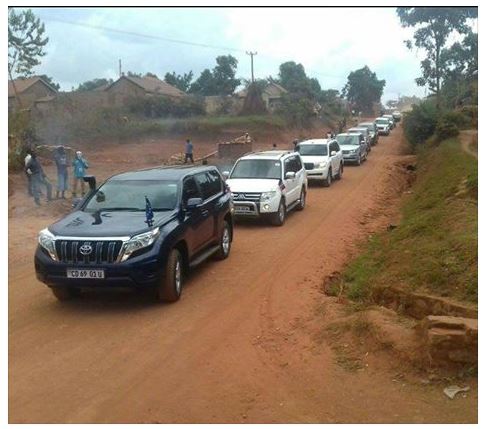 Also later in the day the European Union Election Observers Monitoring (EOM) mission during the General Election in Uganda was courting together with the American embassy riding a big convoy through Wakiso into Kasangati. They could not drive to close and had to have a conversation with the the director human resource development for Police, Mr Andrew Felix Kaweesi. He had to allow them to enter! As the EU EOM was not able to meet him yesterday meet him then, as he was arrested and taken to Kira Road Police Stations and deployed in the evening back to Kasangati. The issue is that EU had to court the Police to enter the compound. This here shows that the words written in the hands of IGP Kayihura from 24th February is utter lies; if he was a free man, the police would not arrest FDC Supporters, would not siege his home and would not tell who could enter and who would be lucky to get to meet him. That is not freedom or liberty, which is a house-arrest where the Police decide for Dr. Kizza Besigye and tell him if he can leave or can visit! This here proves the arrogance of the Police and how the use some words of peace, and does unjust actions the second the public shows the blind eye or doesn’t watch carefully.

Take a look at this arrogance as the loyal supporter show trust and care for his candidate:
“FDC supporter seen escorted by a number of police officers as takes food into the private residence of Ugandan Opposition heavyweight Dr. Kizza Besigye, barricaded by both Ugandan military and Police force for a week since polling day”.

From clear sources when they arrived in the convoy this was the message from the Police:
“A European Union (EU) delegation has been denied entry into Kizza Besigye’s Kasangati home. The delegation arrived this afternoon in a convoy of about six cars. Police which remains deployed outside the residence declined to let them in” (Forum for Democratic Change, (26.02.2016). Something that changed after a conversation with Andrew Felix Kaweesi before entering by foot, because the compound is closed for cars for the moment, as the Police has to secure the area! For some reasons they wouldn’t discuss or really tell, while we all kind of figured it out; as the subtle ways of the Ugandan Police doesn’t really exists... as seen through the pre-election period and continue every single day!

This here shows that there are no moral standards to the leadership of the police as they use the force to the people; as they are treated as subjects, not as citizens as many of the ones by the gates of Kasangati has been detained and driven away. As even the ambassador and the representative from U.S. and EU had to plea to Human Resources Kaweesi as he has the final say together with DPC Kawalya who orders and gives the opportunity to let them in or not. I am sure If they wasn’t international observers and ambassadors that could really sham and destroy the little integrity of the government, they would not have entered the premises and had the talk with Dr. Kizza Besigye. This here proves the mobility and the arrest that he has. If this does not give way and prove the determination of the Police to keep him monitored and also secured in their power instead of giving him an opportunity to talk to his FDC officials and also petition the elections. As the NRM-Regime fears that, because of the massive rigging; they would not go to this extent if he was somebody who doesn’t have the support or political capital to force a change. That is why the Police is not around Joseph Mabirizi’s house, only Professor Joel circles around it to get new jokes to his TV show.

So IGP Kayihura shut-up and talk’s sense, as you ask the public to talk sense and not sensationalize events and rhetoric from the opposition or media. This time it all makes sense, and it is common sense as the facts and the fiction from the Uganda Police Force is just foolish and they could you know; easily see that he manipulates the laws and use Public Order Management Bill as it was intended  the“Anti-Besigye Act” used to suppress his party and his affiliates, as the NRM can do as they want and nobody; especially the Police does not mind, but if the opposition, and especially Dr. Kizza Besigye and the FDC officials; than it is another story and even doing the same; is illegal while it’s okay for the NRM.

So now that Dr. Kizza Besigye continues to live under house-arrest, get detained without a warrant or reason other than pure fiction from the Police, as he supposed to generate chaos or violence; while the Police kills and throw tear-gas unto civilians, while he last time ask for people to walk to a destination, not grab arms and bring down the NRM-Regime as the rhetoric from the IGP Kayihura could sound like. That is the honest truth, though Gen. Kayihura would never say it, because his NRM-Police has loyalty toward President Museveni. That is why the Police secure peace from the President Museveni (that is main objective). The Police does not need to think to much about the government of Uganda or the citizens;  who apparently is the people, because none of them is President Museveni. The IGP Kayihura they are second fiddle and not that important, because he just follows orders directly from President Museveni. Peace.