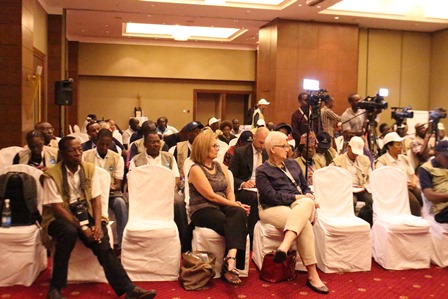 Kampala, Saturday, 20 February 2016: COMESA Election Observer team to Uganda has completed its mission and commended voters for turning up in large numbers to exercise their constitutional right of choosing their leaders in the February 18, 2016 elections.

In a joint press briefing with the East African Community (EAC) and Intergovernmental Authority on Development (IGAD) election observer missions, Leader of COMESA Mission Ambassador Ashraf Gamal Rashed hailed the massive turnout in casting the ballots, and the orderly manner in which voters conducted themselves.

“The polling process was generally free, peaceful and transparent despite the logistical challenges that delayed the opening of polling stations,” Ambassador Rashed said.

The Mission made several recommendations to enhance the conduct of future electoral processes in Uganda. Among them is the need for the Electoral Commission to ensure better organization with regards to logistics such as marking of polling stations, preparation, distribution and delivery of polling materials.

It emphasized the need for a robust communication strategy that will ensure information is relayed in a timely manner from the EC to the polling stations to avoid misinterpretations and confusion that might arise due to delays.

“While noting the progress made to consolidate multi-party democracy, there is need for increased dialogue among political parties and other stakeholders to address any challenges and enhance the credibility of the electoral process and the acceptance of all parties of its outcome,” the mission leader said.

Further, he stated that the credibility and impartiality of the EC should always be maintained and urged the government to adequately provide funding should for the EC to enable it to execute its mandate effectively.

Amb. Rashed encouraged the citizens of Uganda to remain calm and address any electoral disputes that may arise through the proper legal channels.