Today have been a massive day for the FDC campaign convoy in the Iganga district, campaign rallies and travels through it and seen how the public of the district has reacted to Dr. Kizza Besigye campaigning there. The levels of appreciation towards him and his campaign team, take a look!

Hon. Abu Katuntu joins the campaign trail in Iganga, this morning we have rallied the people Kiwanyi as our second stop over.

Iganga: The Mamba is finally here Kizza Besigye campaign team’s security is tighter in Busoga region. This re enforcement is from bridged in Jinja town. 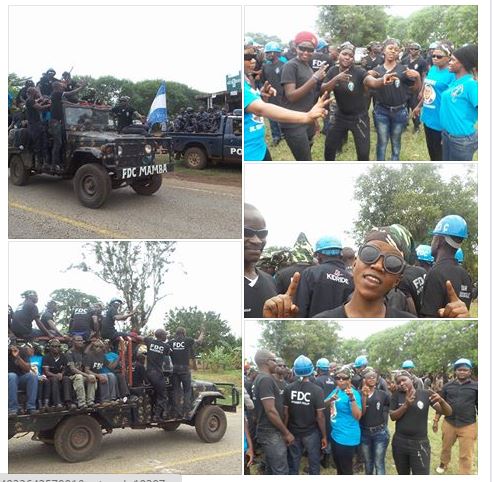 Message in Iganga Town:
“For the last 30 years Busoga region has been the champion of poverty in Uganda. We want to remove that poverty from you. FDC has got comprehensive programs to handle the problems of Busoga. First of all we are to get rid of grass thatched huts in the region by providing 10 iron sheets to each house hold as a quick short term measure for improving the quality of housing.” Besigye said to a big roar of approval from the tens of thousands of supporters in Iganga town.

Governance issues in Iganga:
Some information in the Iganga District, these different stories tell the level of money and how they have governed the area. Interesting, right?

Misuse of funds:
“Iganga district officials have been ordered to report to parliament by Minister Adolf Tumwesigye after they misused district funds” (NBS TV, 19.12.2013).

Paid loyalty in the district:
“Residents of Iganga town received shs 5,000 from MP Peter Mugema as an appreciation for supporting the NRM resolution that fronted President Museveni as the sole party candidate for the 2016 elections” (91.2 Crooze FM, 22.04.2014).

Push away from the market in town:
“Law enforcement personnel in Iganga have impounded merchandise belonging to 150 street vendors. The town clerk Iganga municipal council, Assy Tumwesigire says the street vendors had three months earlier been given a notice to vacate the streets of Iganga municipal council in vain. Tumwesigire says the vendors had earlier been instructed to take up gazetted areas like markets but have since become hesitant to comply. One of the traders whose merchandise was impounded, Janat Namukuve says she had borrowed 400,000 shillings from one of the microfinance institutions with a view of setting up a business of cooking food but now all her capital is no more and does not know how she will pay the loan” (Step FM/TV, 02.03.2015).

Hospital conditions:
“Residents of Iganga Municipality have expressed concern about the growing stench of dead bodies from Iganga Hospital. Dead bodies are dumped in a makeshift structure without a door leaving dogs and flies to feast on them. The structure also lacks a roof” (NBS TV, 11.03.2015).

Local Coffee program:
“The MP Kigulu South Milton Muwuma Kalulu has said that on Wednesday 15th April 2015 he will be distributing coffee seedlings to his constituents. Speaking from Iganga district headquarters, Muwuma said that this is a government program which is meant to be implemented by prepared farmers in the area. He said “that the government brought 50000 coffee seedlings plus eucalyptus trees, therefore farmers with prepared gardens are to benefit from this project” (Source: Ibrahim Ndogha, 14.04.2015).

Appreciation for a local NGO:
“Iganga District Local Government applauds ANPPCAN Uganda for the positive impact on the lives of Orphans and Vulnerable Children. ‪Together‬ along the path to ensure all children are protected, secure and cared for” (Anppcan Uganda Chapter, 24.06.2015).

Reactions after NRM Primaries in 2015:
“Court in Iganga has granted bail to the 4 suspects who were arrested yesterday in connection with abduction of NRM district registrar Kirunda Yazid. Toto Abdur Akimu Ali 40, Sserumbe Henry 25, Matende Beast 24, have been granted bail by the Chief Magistrate Iganga Court Komakech William after paying 250,000 cash each” (RFM Iganga Fans, 27.11.2015).

I think that was enough for today, hope you enjoyed it. Peace.