Mzee campaigns in Kabale; shuns the regulations by the Electoral Commission again; while Police steady looks at their master

Today there been issues with NRM and Mzee campaigning that have involved in the matter of electoral practices. Firstly the comrades for the National Resistance Movement decided to tear up Go-Forward Posters and pin-up posters of Mzee in Karamoja region. The pictures tell the story. The other issues are bigger, but the Electoral Commission has said before the campaign rallies that this was not acceptable, still it happens everywhere and Mzee’s campaign posters are standing strong and not touched while opposition candidates ones are destroyed or pinned over. That must be something to think about Badru Kiggundu aye?

Today NRM Convoy where in the Kabale region and had campaign rallies in the area. So before the campaign rallies the President Museveni had to breach the new-found regulations that Presidential Candidates are not allowed to visit. 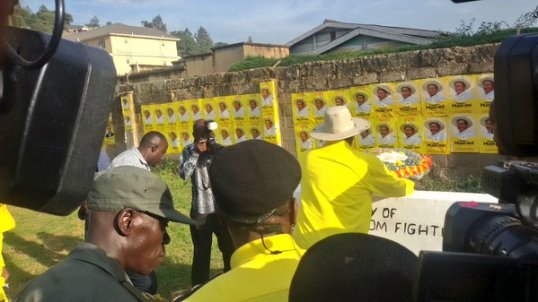 First: He visited the Kabale Muncipal Grounds and laid flowers (Wreath) on the graves of the fallen Patriotic Freedom Fighters who we’re fallen in 1973. This is Okayed by the Electoral Commission while Hon. Amama Mbabazi we’re not allowed into a Memorial Grounds during his campaign trail. Well, who can stop the almighty President right?

Second: He visit a public building which is a museum in Muhanga Town, this was the Great Lakes Museum. To oversee the structure and building; something that would been closed down by Police and not let the other Presidential Candidate visit the premises. 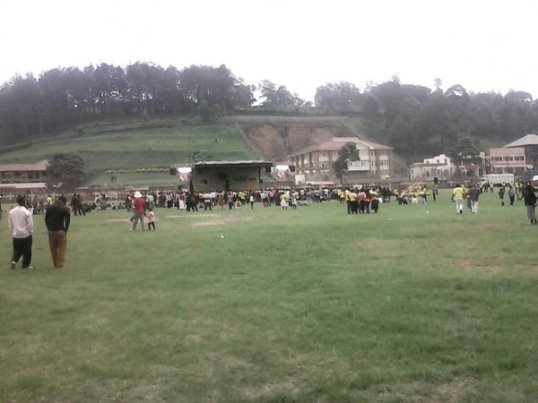 Third: There we’re rally over the stipulated time in Kabale from the Mzee, the other candidates get issues and closed venues if they go over the 6:00 PM. This have happen to Hon. Amama Mbabazi and Dr. Kizza Besigye during the campaign trail. Mzee hold it over the time while the Police we’re standing and looking at the breach of the regulation, because they know who keeps them paid.

Fourth: The citizens who would attend the rally in Kabale we’re promised UGX 3,000shs for attending the rallies that is real loyalty just the way Mzee likes it. If he can pay you and you do something for him, then you’re a proud NRM-Supporter.

So know we have all seen this and known that in recent days that the Anti-Riot Police have followed Hon. Amama Mbabazi and police have tried to get people to shun the campaign rallies of Dr. Kizza Besigye, how can he continue like nothing? And still claim to be democratic and ask for respectful language from his competitors?

There are so much I could say and describe in on matter, but at this point why should I. There is coming more and we are 45 day to the polls starts smashing and I fear the online will strike and social media shut-down on 18th February. We all know that the beacon of truth and justice is dangerous of Mzee and his cadres. So here we are, his tactics and opposition fear-mongering are continuing. Like the life-time ruler he is and wish to overcome an be able to reign for over 30 years. Peace.