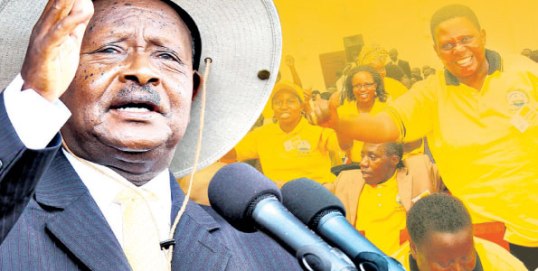 President Yoweri Museveni has assured the people of Uganda that the country is peaceful and there will be no problem as Ugandans move towards the 2016 general elections. He, therefore, advised them to calm down and continue with their usual chores. Mr. Museveni, however, said that those who threaten to cause violence will be restrained.

The President was reacting to comments by Ms. Esther Magagga, a lay Christian leader, who said that in the current political environment, some Ugandans seemed to be at odds with one another over subscribing to different Political Parties.

The President, who was accompanied by his wife Mrs. Janet Museveni, today joined other Christians for this year’s Christmas Service that took place at St. Luke Church of Uganda, Nshwere in Kiruhuura district. Rev. Emmanuel Kwesiga led the service.

Turning to the local community, President Museveni strongly warned them against overstocking their farms saying that apart from starving their cattle, it also leaves land bare. He encouraged them to embrace paddocking and plant quality pasture to enable their cattle produce more milk.

Mr. Museveni stressed the importance of household income to ensure quality livelihood in homesteads. He also revealed that the Nshwere road will be worked on in accordance with the Government plan of ensuring good roads throughout the country.

He congratulated Christians of the area upon reaching 50 years since St. Luke Church was established.
The First Lady and Minister for Karamoja Affairs, Hon. Janet Museveni, thanked the people for turning up in large numbers to appreciate God’s blessings in the long journey that they have covered ever since the establishment of their church, what they are today and where God is taking them. She urged Ugandans to love one another. She asked them to support NRM because the Movement promoted unity among the people of Uganda. She also called for reconciliation between people of different political persuasions who may have developed issues between themselves.