Fifth day of Presidential Rallies with issues between the Media and the NRM + KCCA saga continues. 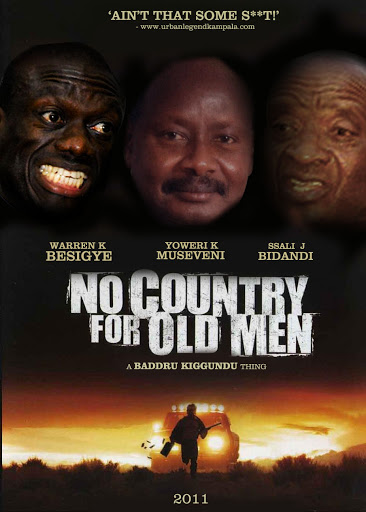 Today it’s the fifth presidential rallies in Uganda. The first working week is over and the rallies will continue. Yoweri Kaguta Museveni is not riding in military vehicles, instead sending the NTV packing for their so-called biased views on the rallies. Then he does love the New Vision today who had a 5-page special on the NRM. There more deflections from the party. I will not spill all the beans. So keep on reading!

“If you vote for somebody who gives some money, that person may not have the capacity to address you core interest” – Yoweri Kaguta Museveni

NRM Rallies and other issues:

Museveni expels NTV from his media team after what he called unbalanced reporting on him. As per now, NTV journalists are being escorted back to Kampala by soldiers of the Special Forces Command. Daily monitor was also warned of a possible closure should their reporting continue to ‘favour’ the opposition ‘against’ Mr. Museveni.

Dr. Livingstone Sewanyana needed to have dialogue with the media houses of New Vision and Bukedde about the current concerns the coverage of the campaigns. Dr.Sewanyana is a member of CCEDU, so he surely wanted to discuss the 5-page piece directly on the NRM rallies yesterday and not much about the other parties in that paper today.

For this dummy of a ‘plane’, the ‘manufacturers’ were reportedly contracted for Shs 400m to have this ‘crowd-puller’ at all President Museveni’s campaign rallies. Having not seen even a coin so far, a group of about 15 youths today stormed Kololo Independence grounds to take back their ‘plane’ but were ordered to back off by the mean-looking military police guards. So mean, the guards were, they threatened to beat up and break the journalists’ cameras who had been tipped off about the demo – warning; “for us, we are not your ordinary policemen”

Yoweri Kaguta Museveni had a rally at Omuge School in Bala Sub-County. Where he said: “Government to set up and maintain boreholes”. 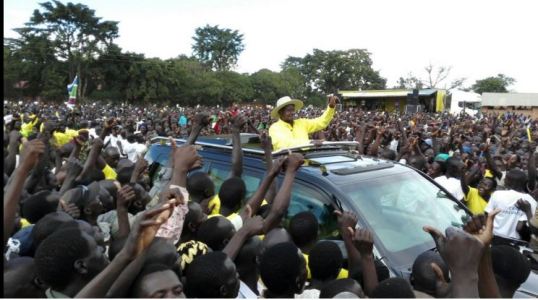 NRM campaign in Kole South there was even UPC Officials was endorsing the President. At Benson Ogwal Obua the UPC spokesman has told the NRM Caucus and at the Rally that the UPC votes in the Lango Sub-County should vote NRM. Jimmy Akena of the UPC said this about TDA today: “Our instance on lowering our flag at TDA offices was because we hadn’t agreed to join the alliance. Party hadn’t agreed” (…)”I can’t make a decision on behalf of the UPC. Such decision are made by the party. Currently, we’re listening to both sides” (…)”We are listening to all voices. Our purpose in this election is to restructure the party and target 2021” (NBS TV).

He had a rally at Apac.

“About 200 angry supporters of the ruling National Resistance Movement in Mbarara district this morning denounced the party and proclaimed support for the Forum for Democratic Change” (…)”The supporters led by Bitekyerezo’s chief campaigner Polly Katwiire gathered at Mbarara independence grounds before the Deputy RDC Jimmy Kateera and started destroying their party cards” (…)”They accused Chairman Jomo Mugabe of altering the election results and going ahead to publicly brag about it” (Nahamya, 2015).

NRM members and even FDC members from the Masaka deflect to Go-Forward:

«How can 19 women die every day and then u find women singing no Change? That would be singing no change to your grave”. 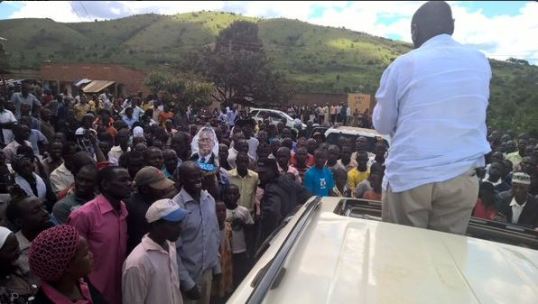 Dr. Kizza Besigye said this at Katovu in Lyantonde District:

“We will reduce the cost of administration and do away with unnecessary expenditure. We will not have RDCs and, Presidential advisors. We shall only have 20 cabinet ministers and 20 state ministers. These ministers will be the presidential advisors. After we have cut the cost of public administration. All that money will then be brought to service delivery. Why should we have a parliament of 400 mps?! Only 150 ‘mps can be enough”.

FDC’s Kizza Besigye at Katovu…now headed to Mpumudde for the first rally of the day.

“Thank you Lwengo and Lyantonde for receiving us, we appreciate that you are all fired up to usher in the change we all deserve. ‪#‎WesigeBesigye”.

“It would be injustice to myself and my country not thank my friends in the media for the voluntary and patriotic excellent job of giving me constant millage and coverage and talk-shows all thru. I value every effort you make yet surely even my press Secretary is struggling on his own to make every coordination. I now know who the patriots of this nation are and the struggle has just started. I am sorry to mention a few, Andrew Gulumaire Andrew, Mbajjwe Rodgers, Kimalyo Tom, Uncle Meddie, Aldon Walukamba, Moses Bikala, Antony Palapande, Ivan Lubega, Donald Kirya, Denis Edema, Joseph Gwina, Bakaki, Yazid Yolisigira Tausi Kizito, David Lukakamwa, Baleke Baleke Trevor Solomon John Magezi and Rachael Wambuzi, any way the list is long. Andrew Gulumaire, you deserve a special thanks, Your my strength.Tomorrow it’s Busia and Tororo”

Today Maureen Faith Kyala had a campaign together with Elton Joseph Mubirizi was in Luuka and Namutumba.

“2016 presidential candidate Venansius Baryamureeba says campaigns will slow down the economy because Ugandans are staying away from work to attend rallies. Professor Barya cites this as reason behind his decision to suspend rallies and resort to door-to-door engagement, online — especially Facebook and Twitter — and broadcast methods of campaigning” (NBS TV).

Amama Mbabazi said this today: “Land grabbing is a problem in Uganda”. 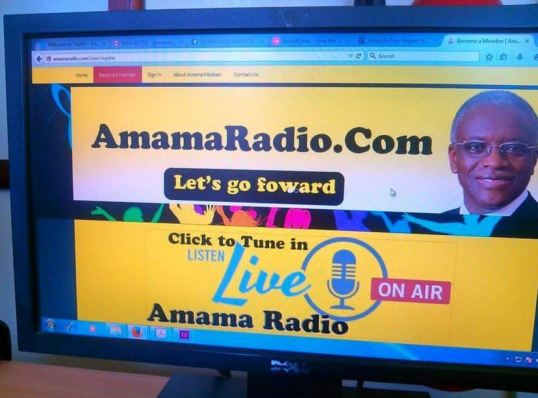 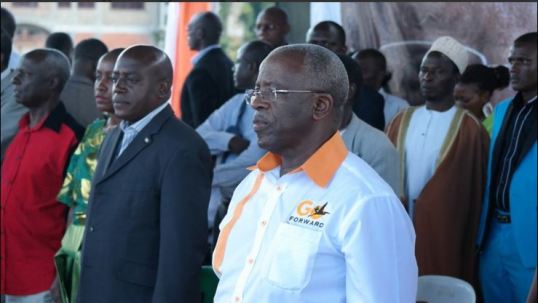 “Thank you Luwero for welcoming me with open arms. We must continue to engage on issues that affect the community. Once again I would like to emphasize that we must tackle issues of veterans compensation; Forward linkages especially agro-processing of the main crops in the area (pineapples and oranges), cooperatives especially with regard to financing of agriculture as well as having adequate Health Centers 3 and 4 that serve the community”. 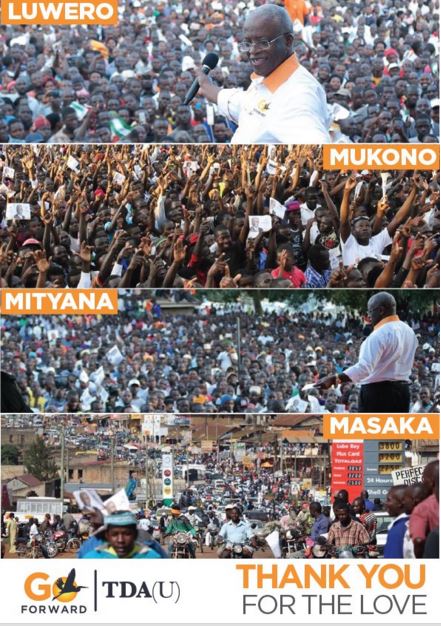 IPOD the platform where all parties that have representation in Parliament NRM inclusive is holding a special Council meeting today at 2pm.

The abnormal increase of Nomination fees

There will be a by-election in Rwampara in Mbarara District, after Vincent Kyamadidi contested the NRM Primaries and the earlier polls in the region.

Nominations of Lord Mayor and deputy hopefuls previously slated for November 16. This is deferred to the Minster of the Kampala is yet to guid the Electoral Commission.

“I picked the nomination forms for the position of the Lord Mayor a couple of weeks ago and set out to collect the requisite endorsement or signatures from the voters. On Wednesday this week, I proceeded to the EC offices and submitted the duly signed forms to the Kampala District Returning Officer, Charles Ntege, and booked my nomination for monday 16th November at 11:00am. Once that process was set into motion, Mr. Badru Kiggundu exhausted all his powers to reverse or halt it, and, accordingly, he is not at all seized with prerogatives to call it off on such spurious grounds that he is waiting for the enactment into law of what I would aptly term as the ”LUKWAGO BILL” that was tabled in parliament by Hon. Ruhindi . I wish therefore to inform all and sundry that our nomination programme is still on as earlier arranged”.