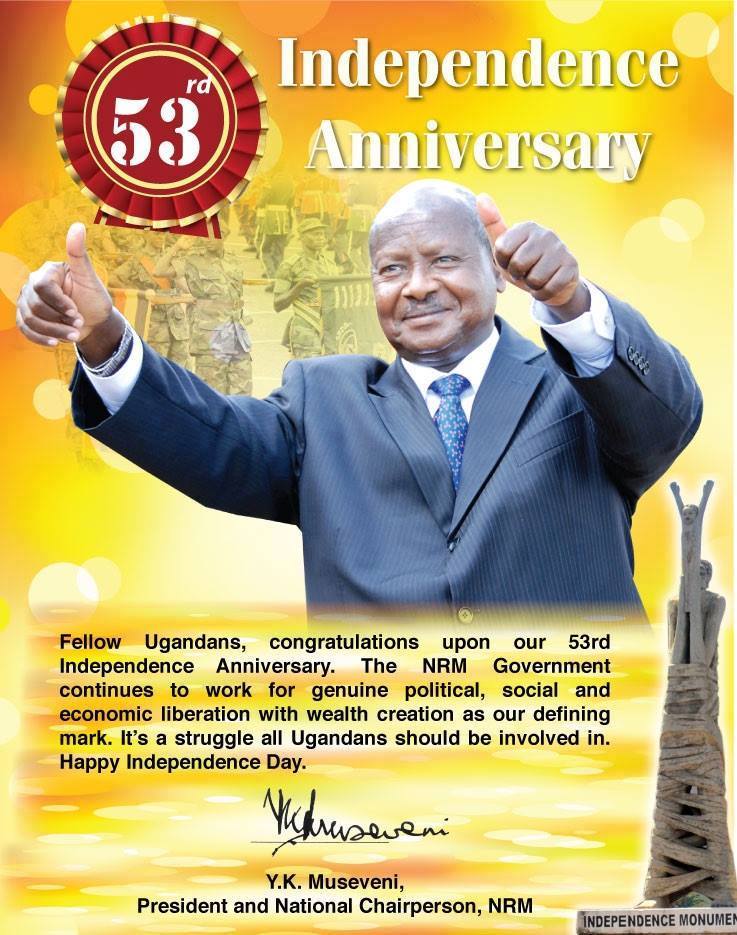 (YKM will hold a speech later today on Kololo Airstrip. Sure it will give even more “insights”)

But before that, enjoy the message from the FDC Flag-bearer!

Independence Is not about just changing flag. In this county, Ugandans do not control the means of production. production is governed by two cardinal factors.
One land
We have Ugandans who are completely landless, they have no rights to land. They don’t have control over their natural resources including the most basic one which is water. The only natural resource they control is air.

Ugandans do not control the capital assets and they don’t control their labor. They are toiling for free. Govt has failed to put in place policies. Those who are lucky are exploited. They are modern slaves.
They don’t have control of technology.

The majority of Ugandans have no say in the trade and exchange policies. Wat ever little they make is taken for less.
We have no control over our taxes and expenditures.
We have a citizenry who are powerless after more than a quarter of a century.

The unprecedented poverty and unemployment.
These conditions will not change until the people of Ugandan acquire their power..

As we mark the 54th independence, Ugandans must regain their power. This is the most fundamental tasks of our people.

A powerless Citzen has no business in an election. Ugandans are still defrenchised as when they didn’t have votes.
You have a piece of paper without power.

I would like to invite our fellow citizen to rethink their role and how they determine it in the next election.
We are refuges in our country.

To gain power we must do three things.
We must realize that we don’t have power and without it, nothing will change.
We must regain our confidence as Citizens that this is our country.
With a confident citize we must get power the rest is easy.
We must stand up and say no. We are not going to be dominated again.
That unity is a unity of purpose. We need to get together inorder to regain our power. Not to get together to comply with our oppressor.
Some people want us together to comply with our oppressor.
We must defy our oppressor.
Those who want to organise to defy the oppressor to regain our power, am going to join them all the way.
Those who want to comply with the oppressor, I won’t be on their side.

Am happy on the Eve of Independence, am excited about the young people who are setting the agenda.
Am excited about the young people in MUK who are saying NO to the 100% tuition payment. We shall set the agenda.
The young people will lead the way to our liberation.
Am joining the 54th year of independent with hope. Am only disappointed where everybody is up for sale.
When I was moving around the country, poor Ugandans were giving me money to liberate our country.
We shall use our meager resources to liberate our country.
God Bless You.

(And the last Amama Mbabazi and the TDA:)