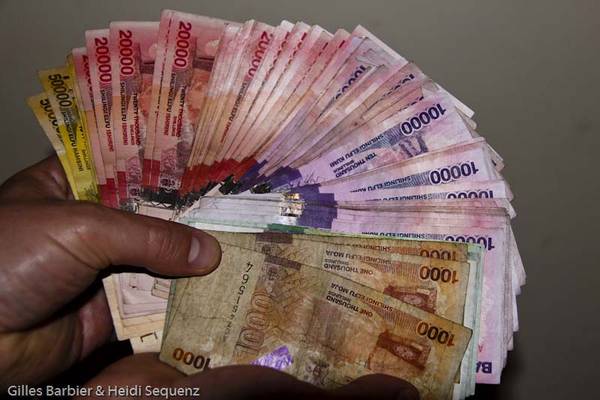 Now I will go through how the IMF is describing the economic situation in Uganda. It will have similarities with the budget of 2015/2016. Seem like the Ministry of Finance in Uganda. The numbers and fiscal standards are exactly the same. Still I think it will good to see and give what the Western Hemisphere and the monetary organ is saying about the economy of Uganda. So that people can see the similarities and also the difference quotes from the situation.

Min Zhu the Deputy Managing Director and Acting Chair in the IMF commented on Uganda in this way:

“The economic policy mix is expected to remain focused on attaining growth and inflation Objectives” (…) “The Bank of Uganda is encouraged to remain firmly focused on the maintenance of price stability” (…) “Enacting regulations to implement the new PFM Act and a charter of fiscal responsibility, and improving cash management are critical remaining reforms. Amending the Bank of Uganda Act and enacting financial institutions legislation are key steps to further enhance central bank independence and strengthen financial resilience”.

“Uganda’s recent economic performance has been favorable. Real GDP growth is projected at 5¼ percent for FY2014/15 supported by a fiscal stimulus and a recovery in Private Consumption” (…) “Economic policies in FY2014/15 have supported growth and stability objectives. The fiscal deficit is estimated at 4½ percent of GDP, below previous projections, on account of a sharp tax revenue increase” (…) “The outlook is promising. Growth is estimated at 5¾ percent in FY2015/16 and an average 6¼ percent over the medium-term, driven by scaled-up public investment and a rebound in private demand”.

The Executive Board Assessment:

“Directors stressed the need for continued fiscal discipline in the pre-electoral environment, and recommended strengthened communication with the markets” (…) “Directors welcomed the adoption of the Public Financial Management Act, and advised prompt enactment of its regulations”.

“Security concerns following unrest in neighboring countries and terrorist attacks in the region have weighed on Uganda’s spending needs, exports, and remittances. Declining donor support in reaction to concerns about governance and human rights and reduced development partners’ aid budgets have spurred domestic borrowing requirements” (…) “During a period of moderate growth, inflation has come down significantly from its 33 percent peak in 2011; and despite a decline in international reserves and a pickup in public debt, both remain at comfortable levels” (…) “The reduction in the stock of domestic arrears was smaller than targeted reflecting a decision to backload intra-year repayments, but the annual target is expected to be met. Contracting of nonconcessional borrowing (NCB) for hydropower plants (HPPs), roads, and electrification was within the $2.2 billion limit. Most end-March ITs were met” (…) “The approval of the Public Financial Management (PFM) Act in November 2014 was a major milestone, and structural benchmarks on finalizing preparation on its regulations and the Charter of Fiscal Responsibility (CFR) were observed. The Treasury Single Account (TSA) set-up has laid the stage for improved cash management although more time will be needed to eliminate movements of cash and incorporate donor accounts in the system. The submission to parliament of amendments to the Bank of Uganda (BoU) Act was postponed” (…) “the government has started the implementation of an ambitious investment package aimed at narrowing the infrastructure gap, enhancing regional integration, and preparing for oil production”. 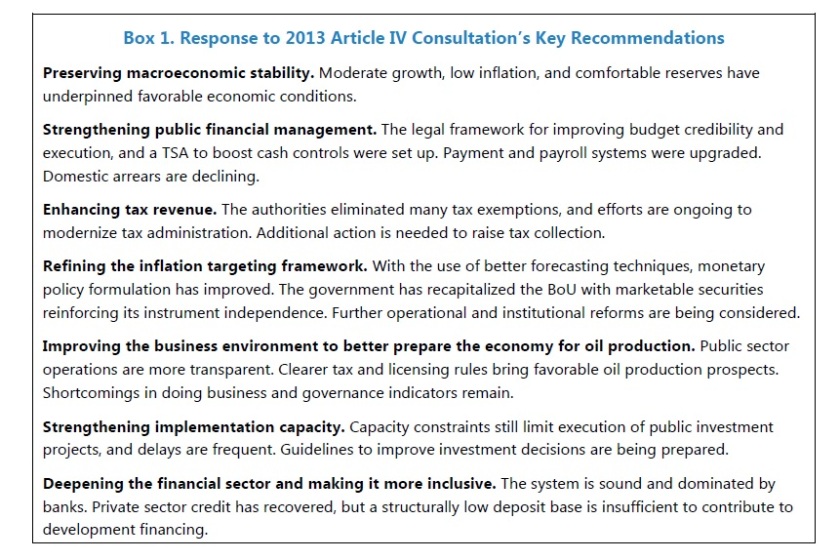 “real GDP growth was 4½ percent in FY2013/14, driven by services, trade, construction, and manufacturing—below the estimated potential of about 6 percent” (…) “The nominal exchange rate against the US dollar appreciated by 7 percent in the year through February 2014, and since then depreciated by 20-25 percent” (…) “The real effective exchange rate appreciated by about 4 percent in 2014, mainly reflecting the weakening of Uganda’s main trading partners’ currencies” (…) “Annual core inflation fell to 2.7 percent in December 2014 and rebounded to 4.8 percent in May 2015” (…) “GDP was revised upwards by 17¼ percent in FY2009/10, the base year. The services sector and to a lesser extent the agricultural sector increased their share in GDP, while the share of industry and construction declined” (…) “Short-term benefits of the oil price decline have been less pronounced in Uganda than in other countries in the region. In the past nine months, petrol average pump prices have declined by 10 percent in domestic currency” (…) “Oil investments might be delayed in the context of lower profitability. Moreover, many interrelated investment decisions are dependent on the oil price, including granting production licenses; signing commercial and financial arrangements; developing engineering, procurement and construction plans; and agreeing on transnational infrastructure works” (…) “The current account deficit remained large owing to structurally high trade deficits. Imports of capital goods and petroleum products are increasing, while both coffee and non-coffee exports have stagnated since mid-2013 reflecting depressed food exports to South Sudan” (…) “The monetary policy transmission asymmetry is explained by the banks’ cautious focus on loan recovery and their high operating costs, coupled with some crowding out effects as government’s domestic borrowing requirements increased at that time” (…) “The number of commercial banks has increased from 14 to 25 with a large influx of foreign banks, which currently hold 80 percent of assets” (…) “the BoU kept a tight policy stance, holding the CBR constant at 11 percent from June 2014 to April 2015, and then raising it to 12 percent, on account of global developments and the ongoing and expected exchange rate pass-through. The BoU’s intervention in the foreign exchange market has been focused on its program of announced dollar purchases for reserve build-up, but in the last few months it has been intervening on the sale side to smooth the fast-paced shilling depreciation. This intervention, along with increased infrastructure-related government imports, drove reserves down from $3.2 billion in end-December to $2.9 billion in mid-May (about 4 months of imports)”.

“Public investment financing, alongside weaker exports and tourism receipts, will drive the current account deficit up while preserving reserves at 4 months of imports” (…) “Low consumer prices—with average core inflation projected to remain within the PSI consultation inner band at 3½ and 6¼ percent for end FY2014/15 and FY2015/16″ (…) “Slower growth in key trading partners and further spillovers from lower global liquidity could trigger capital outflows, squeezing liquidity and generating currency mismatches for banks and corporations. In the medium term, the complex commercial and legal aspects surrounding FDI in the oil sector could delay the planned investments”.

“The latter has been at the center of the authorities’ economic agenda as infrastructure investments of around $11 billion—including PPPs—are expected over the next ten years” (…) “With recoverable crude oil reserves of 1.7 billion barrels out of potential reserves of 6.5 billion, oil production would start in FY2020/21 under a model that entails a crude export pipeline and a domestic refinery” (…) “Uganda ratified the Monetary Union Protocol, and has been actively participating in work to establish EAC regional institutions and to create a fiscal surveillance process” (…) “the Uganda Revenue Authority (URA) to improve enforcement and compliance, but a sustained increase in the ratio will require incorporating the large informal sector into the tax-paying portion of the economy and ensuring that large taxpayers comply with their obligations” (…) “Sustainable financial deepening will largely rely on making steady progress on financial inclusion, which will in turn depend on actions to boost the bank deposit base; enhance the intermediation role of non-bank financial institutions, including the National Social Security Fund (NSSF); and develop the money and capital markets” (…) “Staff’s debt sustainability analysis, which includes the infrastructure package as a whole, concludes that the public and publicly guaranteed external debt-to-GDP ratio in net present value (NPV) terms would peak at about 25 percent in FY2020/21. Even combined with domestic borrowing plans, total public debt would remain well below the benchmark associated with heightened vulnerabilities” (…) “The tax-to-GDP ratio in Uganda was one of the lowest in the region prior to the GDP rebasing and is definitely the lowest afterward. Over the past ten years the ratio only increased by 0.2 percentage points per year, on average” (…) “Planned improvements include URA’s efforts to assess income from rental properties and identify businesses that are accessing local services but not filing national tax returns. Use of enhanced controls and creation of a single central processing center for all customs clearances should boost customs revenue” (…) “EAC convergence criteria, Uganda has targeted a tax-to-GDP ratio of 25 percent by 2021”(…) “Social protection in Uganda is entrenched in the Constitution, Vision 2040 and the NDP II. Interventions have nonetheless been limited and fragmented—with only 0.4 percent of GDP a year devoted to direct income support and 1.2 percent of GDP to total social protection”.

“The overall deficit increased by 2 percent of GDP between FY2011/12 and FY2014/15” (…) “The overall deficit is projected to increase by an additional 2½ percentage points by FY2017/18 fueled by a continued expansion in capital spending (3¾ percentage points) and a small increase in current spending (¼ percentage point), and curtailed by a further improvement in revenues of at least ½ percent of GDP each year” (…) “the supplementary budget used part of the windfall revenue and expenditure savings to cover operational shortfalls at several ministries, and Electoral Commission outlays, among other pressing needs. All in all, the overall fiscal deficit is now projected to reach 4½ percent of GDP (6¾ percent in the program) and issuances of securities in the domestic market should remain within the target” (…) “The FY2015/16 budget will increase the overall fiscal deficit to 7 percent of GDP largely financed by NCB on favorable terms” (…) “The contingency provision was reduced by 0.2 percent of GDP at the time of budget approval to facilitate one-off spending on police activities linked to the election and allowances to parliamentarians, leaving little budget flexibility and requiring prudent execution in the year ahead”.

“Some challenges remain, including insufficient institutional arrangements to prevent government’s use of deposits in BoU accounts beyond agreed levels, and shortcomings in inflation forecasting capabilities and fiscal-monetary policy coordination” (…) “Given the high share of imported goods in the CPI, import prices play a key role in inflation behavior, with an estimated pass-through factor of 0.4–0.5” (…) “The BoU has taken steps to reduce volatility in overnight market rates by allowing all banks (previously only primary dealers) to access BoU operations”.

Securing a more effective contribution of the Financial Sector to Growth:

“The BoU does not stress test banks’ resilience to lending rate hikes because of insufficient data availability” (…) “High dollarization. 37 percent of deposits and 43 percent of loans are denominated in foreign currency” (…) “banks’ business models, with a large share of assets devoted to investments in Treasury bills, reflect cautious risk taking, as well as curtailed policy predictability given the large swings in interest rates, thus jeopardizing credit growth”.

“Core fiscal targets: These targets are based on the EAC convergence criteria, and consist of an overall deficit target of 3 percent of GDP by FY2020/21 and an annual debt ceiling of 50 percent of GDP in NPV terms”.

“That fiscal policy decisions will be strictly aligned to the budget is essential to influencing banks’, corporations’, and households’ behavior. Even more critical, however, is that policy implementation adheres to the budget to build a track record of fiscal discipline during pre-electoral periods and preserve the economic objectives”.

Can you believe it and how the inflation numbers together with the borrowing are not totally the same, that is for the reason that the Budget Deficit has been set by the government of Uganda is on the size of the yearly budget instead of the GDP as the IMF they set it there, the number will significant better and also smaller. Still, the Yearly Review which was ‘Value for Money’ told the same, even if the number will be different next year from URA and Ministry of Finance, Planning and Economic Development (MoFPED) will hopefully drop similar numbers next time. Since the numbers for deficit are going up and also the loans because of missing donor money. While waiting for the money from the Oil Development. Still, wait for how the budget year 2015/2016 will go. Peace.

How the Implementation of the IMF Policy Support is going: 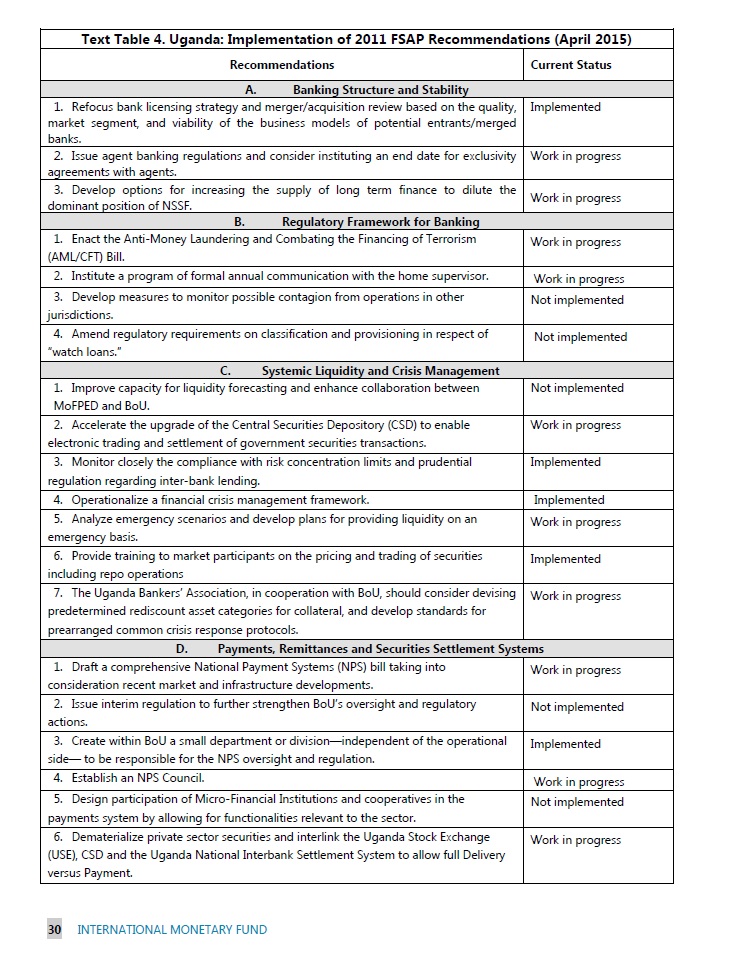 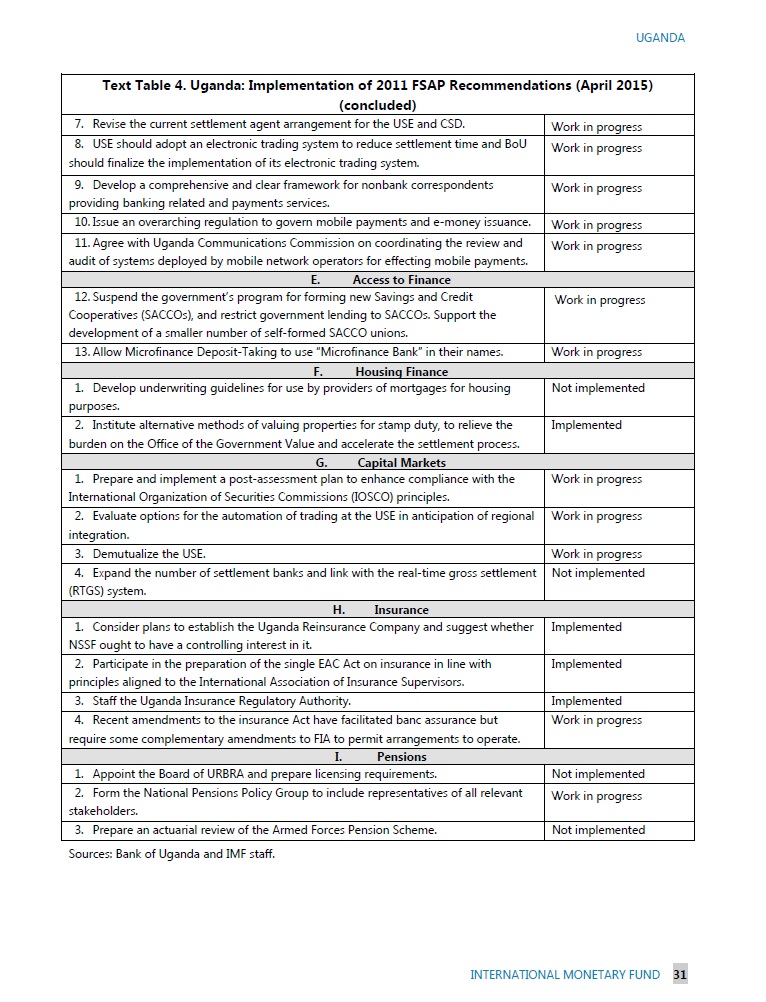 Letter from the Ministry of Finance, Planning and Economic Development (MoFPED) to the IMF: 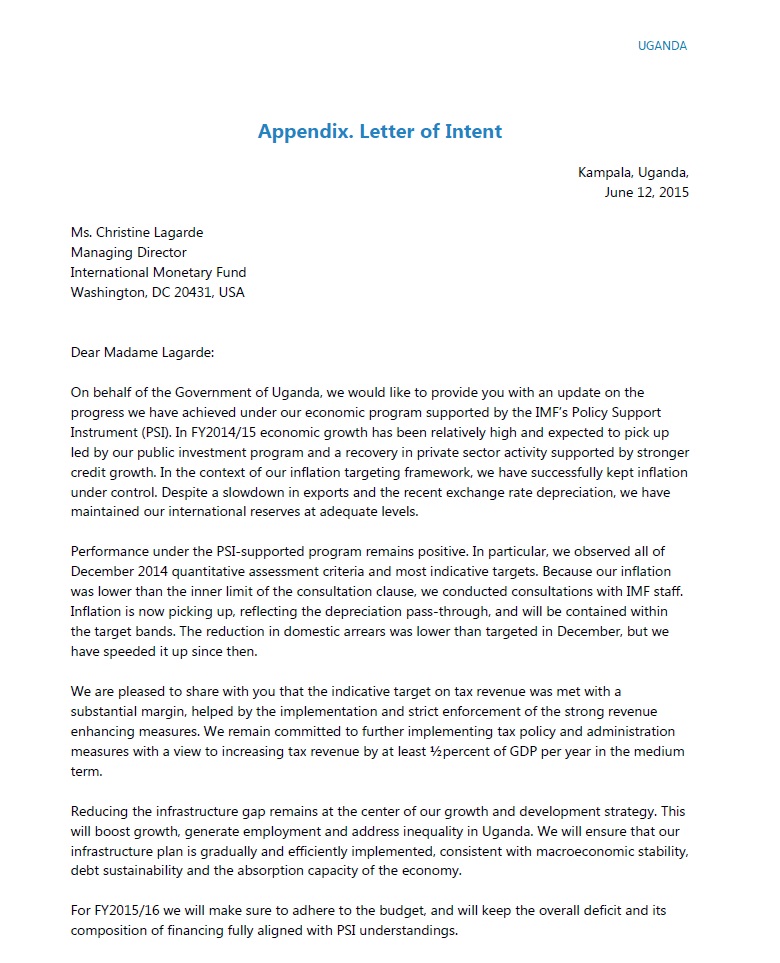 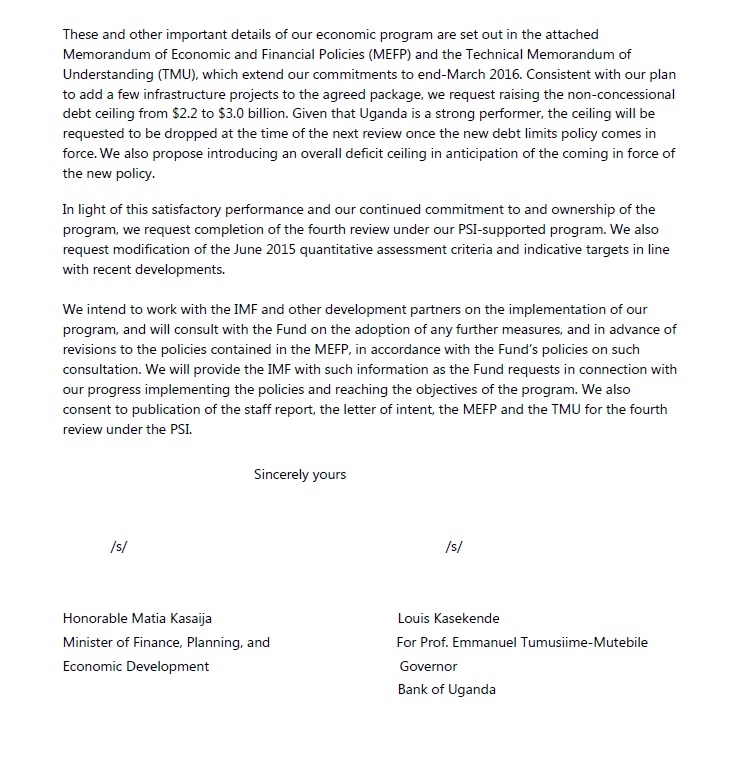