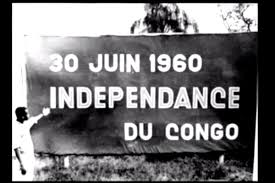 Men and women of the Congo,

I salute you in the name of the Congolese Government.

I ask all of you, my friends, who tirelessly fought in our ranks, to mark this June 30, 1960, as an illustrious date that will be ever engraved in your hearts, a date whose meaning you will proudly explain to your children, so that they in turn might relate to their grandchildren and great-grandchildren the glorious history of our struggle for freedom.

Although this independence of the Congo is being proclaimed today by agreement with Belgium, an amicable country, with which we are on equal terms, no Congolese will ever forget that independence was won in struggle, a persevering and inspired struggle carried on from day to day, a struggle, in which we were undaunted by privation or suffering and stinted neither strength nor blood.

The Republic of the Congo has been proclaimed and our beloved country’s future is now in the hands of its own people.

Brothers, let us commence together a new struggle, a sublime struggle that will lead our country to peace, prosperity and greatness.

We shall show the world what the black man can do when working in liberty, and we shall make the Congo the pride of Africa.

We shall see to it that the lands of our native country truly benefit its children.

I ask you all not to shrink from any sacrifice for the sake of ensuring the success of our grand undertaking.

The Congo’s independence is a decisive step towards the liberation of the whole African continent.

I call on all Congolese citizens, men, women and children, to set themselves resolutely to the task of creating a national economy and ensuring our economic independence.

Eternal glory to the fighters for national liberation!